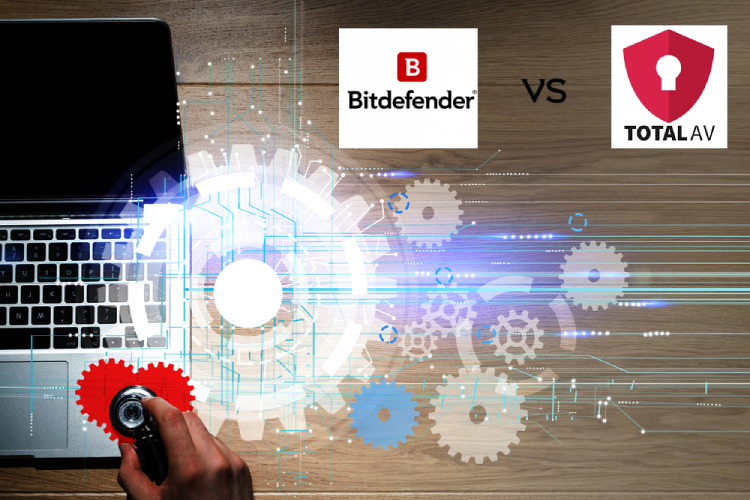 In 2020, international companies are investing billions of dollars into cybersecurity to keep hackers at bay. Home users should also consider safeguarding themselves from outside threats. Bitdefender is a top-3 security solution, with impressive lab test results and one of the most advanced antivirus engines. As for TotalAV, it’s been around for only four years but is already a worthy contestant thanks to the well-above-average performance.

So, how do you know which one to trust with your protection? Which company has the better set of features, stronger performance, and friendlier UI (user interface)? In this post, we’ve got a Bitdefender vs TotalAV comparison to help you make the right choice. Our experts evaluated their pricing policies, available packages, features, security tools, and ran both products through extensive real-time protection tests.

They also checked their performance impact, user experience, and money-back guarantee deals. Let’s get right to it!

Detailed Comparison of Plans and Prices

The first thing that you need to always consider before committing to any antivirus product is the price. So, take a good look at the available packages, their pricing, and what each plan has to offer:

Total AV Antivirus Pro. If you’re not looking for a premium-level antivirus, but rather an entry-level program, Antivirus Pro will be a good investment. It isn’t at all expensive but includes a long list of security features. And, it’s capable of simultaneously covering (protecting) up to three devices (running on all major operating systems). Here’s what you can expect to get with TotalAV’s basic package:

Total AV Internet Security. Why would you want to upgrade from Antivirus Pro to this plan? What does it have to offer? The biggest difference is in the number of protected devices: Internet Security can safeguard up to five. While that won’t be enough for a business (or a big family), statistically, this is the most popular TotalAV package. With it, you’ll also get the full version of the company’s standalone VPN (Safe Browser).

Total AV Total Security. The ultimate TotalAV plan is, of course, the most expensive one. It covers six devices simultaneously and includes two highly useful extra tools that justify the somewhat steep price-tag. First of all, it comes packed with a password manager (it’s called the Secure Password Vault). As the name suggests, it’s a safe vault where you can store all your passwords. Plus, it can sync all your accounts to each other.

The other additional feature is Ad Blocker. True, Antivirus Pro does include protection against ads, but it’s rather basic. The Ad-Blocker, in turn, easily handles the most advanced types of adware and keeps all the pop-ups at bay.

Bitdefender Antivirus Plus. In contrast to Total AV, Bitdefender offers four packages to choose from. However, Antivirus Pro, the entry-level plan, is quite limited. First of all, it can only cover one device at a time. Secondly, it’s not compatible with Macs, Android, or iOS (only the Windows system). Here’s what you’ll get with Bitdefender’s most affordable tier:

Bitdefender Internet Security. Strangely enough, even with the second-grade tier, you won’t be able to protect any other OS but Windows. On the bright side, it will protect three Windows-run devices, which is a better deal than Antivirus Plus. On top of that, Internet Security includes all the features from the basic plan and adds some useful extras:

Bitdefender Total Security. Owners of multiple devices running on different operating systems will find Total Security to be quite appealing. That’s because it’s fully compatible with all the leading platforms, both desktop and mobile. As for the coverage, it can safeguard up to five connections at the same time. On top of that, this package includes four additional services/tools for protection:

That’s it for the available Total AV and Bitdefender plans. Not really sure which one to choose? We recommend taking advantage of the money-back guarantee. With it, you’ll get 30 days to test-run the product(s) and can still request a refund. Or, better yet, download the 30 day free trials – they don’t require you to actually pay with a credit card and then get a refund. A free trial is like a monthly subscription that you get completely free of charge.

Last but not least, consider using free editions. They don’t have any time limits but come with a modest set of features. With TotalAV Free, you won’t get real-time protection (only “offline” scans and malware elimination). But, it is available for all four platforms. Bitdefender Free can only run on Windows, which is a downside. On the bright side, it does include protection in real time, which makes it a more reasonable choice.

As for our verdict, we believe that Total AV is a more appealing solution, especially for regular users. It can cover all four operating systems with the most basic plan. Plus, it’s a lot more feature-packed and will cost you less. On the other hand, the most expensive Bitdefender plans (Total Security and Premium Security) are more feature-packed. And, Bitdefender Free is much safer.

As already mentioned, Bitdefender is more feature-packed than Total AV. We saw that when discussing the available plans and packages. Now, let us take a look at the features/services that they share:

With Bitdefender, you can count on:

It’s easy to see that when it comes to the features, Bitdefender is ahead of TotalAV.

Now that we checked out the available features, it’s time to see how these two solutions perform in real-world situations. As mentioned, Bitdefender is a strong player in this field: it’s been awarded by leading third-party labs dozens of times.Total AV is a different story: up until recently, it used to be a “dark horse” – no big-time company wanted to include it into its annual tests.

However, now that it’s a top-10 antivirus product not only in the US but also worldwide, we finally have the results of multiple lab tests. As always, to determine the best antivirus, our experts ran a series of their own tests and compared the results to the AV-Test and AV-Comparatives numbers. There weren’t any significant differences, which means the following evaluations are, indeed, highly accurate.

Earlier this year (in March 2020, to be exact), AV-Test ran Total AV through a long list of “trials and tribulations,” and it proved to be reliable and trustworthy. In the real-time protection test (called the “Zero-day attack” test), TotalAV detected and terminated up to 98% of the malicious code. In the second test (prevalent malware), it managed to find and get rid of every single planted sample (a 100% perfect score).

With an overall score of 16/18 (6 in Usability and 5 in both Performance and Protection), it easily made it into the top-10. Next, let’s take a look at the AV-Comparatives evaluation. Again, there were two tests: in Performance, Total AV gained two stars and only one star in Protection. Though these results were decent, they couldn’t compete with Bitdefender.

That’s because the rival beat it in every single test, except for Usability. AV-Test rated Bitdefender’s capabilities and awarded it with the perfect score (18/18, 6 in all three categories). And what about AV-Comparatives? Did Bitdefender beat Total AV there as well? Yes, it managed to detect and remove every single malicious sample – this was only achieved by a select few internet security solutions.

In the Real-Time Protection, Performance, False Alarm, and Malware Removal tests, it earned three stars. In the Ransomware protection and anti-phishing tests, its effectiveness was, again, impressive, while Total AV failed at detecting some of the planted samples and malicious URLs. Summing up, Bitdefender is the obvious winner in this round of the competition.

Performance Impact and User Experience of Bitdefender and TotalAV

A quick note: both Bitdefender and TotalAV are consumer-oriented products. That means they are very easy to use, straightforward, and mostly automated. You won’t have to change any settings to make them more efficient. While working in the background, they don’t interfere with your workflow, which is a big pro. First, our experts checked TotalAV’s interface to see how user-friendly, intuitive, and quick-to-respond it is.

The main dashboard looks very “inviting,” and you can instantly see the status of your system. If the dots are green, that means you’re ok. Yellow stands for “there might be something wrong,” while red signals that you’re infected. The big icons allow you to instantly access the Antivirus, System Boost, Disc Cleaner, and Web Security menus.

The icons right below them are smaller and lead to a bit more advanced settings. To run an instant scan, just hit the big green “Scan Now” button in the bottom right corner. Overall, you’ve got three standard scans to pick from. We’re talking about the Quick, Full, and Scheduled scans. With Scheduled scans, users can pick which files/folders/apps should be checked and even set the start date.

As for the system impact, it’s well below average. The Total AV antivirus software doesn’t slow the computer/mobile device down even during a full scan. With that said, the scans are very thorough and can find even the most sophisticated (and deeply-embedded) malware. Here are the official requirements (that means you can run this program on a similar setup):

Now let’s check out what Bitdefender has to offer to the regular users. In terms of flexibility and usability, it’s just as good as TotalAV. Bitdefender has been around for decades, and the team had more than enough time to perfect the program. It is very fast, easy to navigate, and everything is always within reach. All it takes to change a setting or launch a scan is a couple of clicks (or taps if you’re on a mobile device).

Just like Total AV, Bitdefender runs smoothly on all major platforms (Win, Mac, iOS, and Android). On top of that, it comes with a gamer mode that eliminates any pop-up messages so that you can focus on your work. However, during scans (especially the Full scan), Bitdefender’s impact is higher. It’s nothing dramatic, but still, compared to its rival, this software is slightly more demanding. Check out the system requirements:

As you can see, the official system requirements are also higher, and Bitdefender doesn’t support XP or Vista. On the other hand, it does run on iOS 11.2 and Android 4.1, which can’t be said about its rival. So, which product should you pick? If you’re using a relatively old computer/mobile device, we would highly recommend choosing Total AV as your antivirus. It runs significantly smoother on outdated systems and won’t disappoint you with slow performance.

And that concludes our detailed comparison! We went through every single key aspect of both Total AV and Bitdefender and can now come up with the verdict. So, who do we think is the winner in this TotalAV vs Bitdefender competition? It depends on what you’re looking for in an internet security product and what you can spend on it. If security is the #1 concern for you, then Bitdefender will obviously be the better choice.

First of all, its real-world tests are on par With Kaspersky and Norton – the leaders of the industry. Secondly, it has a couple of useful extra tools/modules that TotalAV lacks. However, in terms of pricing, it’s lagging, as Total AV has better year-one deals and more generous discounts. Plus, its performance impact is lower, and you can launch it on outdated hardware and software like Pentium 4 and Windows XP.

Again: if you’re on a tight budget, Total AV will be the most reasonable purchase. In contrast, the Bitdefender Antivirus can be an ultimate security solution for users that are ready to pay more for the best of the best. Don’t rush yourself: carefully go over all four sections of this review and only then make a decision. Plus, you can always use the money-back guarantee. There’s nothing worse than picking an antivirus program only to regret your choice later!

What is the Best Antivirus App For Android?

How Do Antivirus Programs Work?